NEW YORK, August 30, 2021 – Ahead of the Labor Day holiday, Diageo North America launches a new online experience and tool in the United States to change attitudes among 21–35-year-olds around the decision to drive impaired by substances. Developed in partnership with the United Nations Institute for Training and Research (UNITAR), Wrong Side of the Road is a virtual learning experience that starkly conveys to users the effects of alcohol and driving, as well as the stigma and consequences that result from making the decision to drive while impaired.

Wrong Side of the Road presents a series of videos where three impaired drivers share their impactful real-life stories – including someone who crashed on his way to work the morning after a night of drinking, an individual who drove impaired in an effort to look for his brother who he believed to be in trouble, and a father who crashed into a wall driving to a high school football game. The interactive tool allows participants to ask the real impaired drivers increasingly raw questions about their decisions and consequences such as “Did you feel pressure to drive?”, “What was going through your head?” and “How did your family react?” through what feels like a live conversation, but are, in fact, pre-recorded responses. At the end of the experience, participants are shown a summary of learnings and directed to other online resources that can offer additional information and support.

“I know first-hand the harm of impaired driving and the ripple effects even one bad event can have on many, many people. It’s very hard to face the fact that you drive impaired,” said David Whitesock, who is featured in one of the stories included in the tool. “What’s incredible about this project is that you can ask questions you wouldn’t dare ask anyone, but do it privately and get real, personal responses back. Diageo’s tool will help reach people at scale to make better, more informed decisions; decisions that will ensure that people stay home or get home safely.”

“We believe that a single crash caused by impaired driving is one too many. As a leading beverage alcohol company, it is our responsibility to create prevention tools to help save lives,” said Ana Fitzgibbons, Director, Diageo in Society. “With this new anti-impaired driving experience and program, we continue to invest and innovate in our approach to further educate people and create awareness, while stigmatizing the irresponsible behavior. This initiative is a component of Diageo’s global effort to change the attitudes of five million people by 2030 when they think about drinking and driving.” 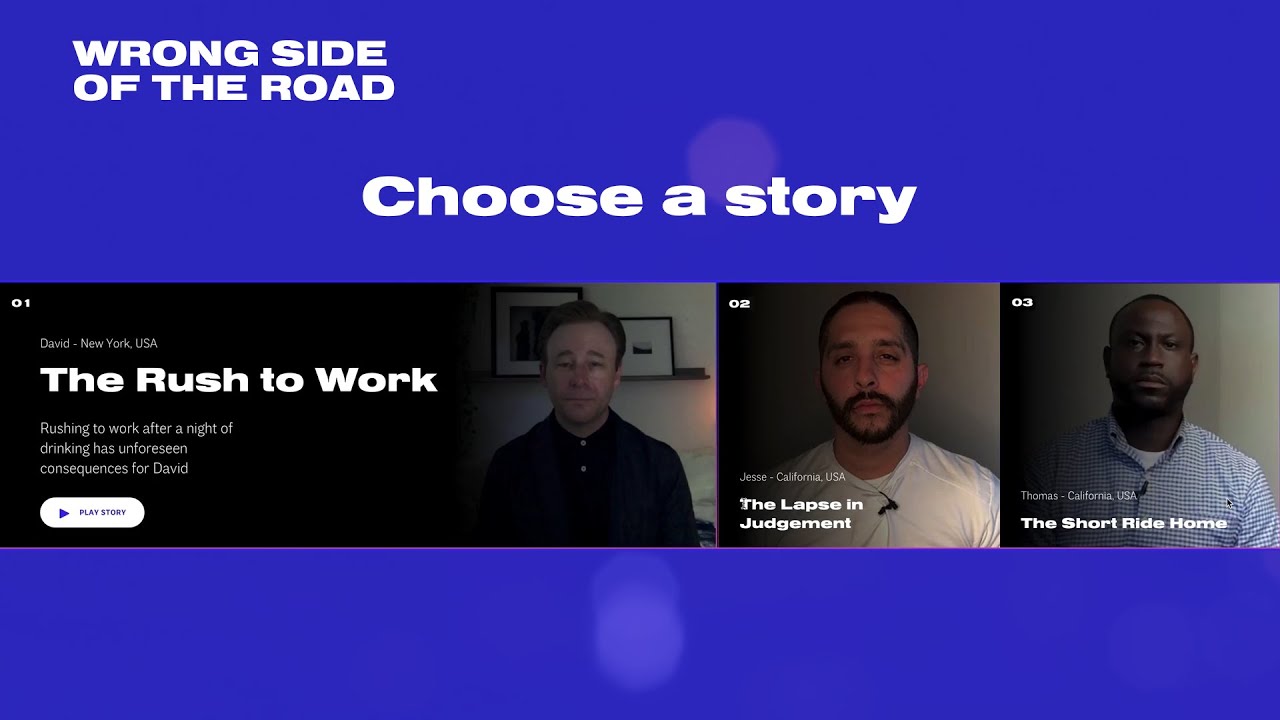 North America is the company’s second market to roll out the tool, after Diageo launched it in the United Kingdom in May 2021. Diageo plans to expand the tool’s roll out to additional markets including Ireland, Italy, Greece, Spain, South Africa, India, Nigeria, Mexico, Colombia and Dominican Republic over the next 12 months, with users in each market able to select from a series of real impaired driver incidents based in their own country or region, in their local language. Diageo North America is also exploring partnerships with various organizations to expand the reach of the learning experience.

“The consequences of impaired driving are far-reaching and all too often extend well beyond ramifications for the offender. Early estimates indicate impaired driving fatalities have increased sharply in the past year due to many factors – mental health concerns, a false sense of security due to less populated roads, speeding, and impaired driving. As Labor Day weekend approaches, we remind Americans to not only engage with Diageo’s new program, but to drink responsibly, plan ahead for a safe ride home if they choose to drink, and to never drive impaired. Not only could you ruin your own life, but you could also take the lives of others,” said Chris Swonger, president and CEO, Distilled Spirits Council of the United States and Responsibility.org.

Diageo has a long-standing commitment to promote responsible drinking through moderation and addressing the harmful use of alcohol. The company has a history of supporting global initiatives aimed at reducing traffic deaths and improving road safety. In North America, Diageo has funded safe rides, designated drivers and free transportation; supported the enforcement and development of impaired driving laws; and introduced a virtual reality experience that put consumers virtually in a fatal drunk driving crash to educate on the importance of responsible decision-making when drinking.

The Wrong Side of the Road can be accessed at https://drinkdriving.drinkiq.com/ and is Diageo North America’s latest responsible drinking initiative and part of an evolving approach that promotes changes in attitudes as a way of tackling impaired driving and supports the company’s 10-year sustainability action plan, Society 2030: Spirit of Progress.

Diageo is listed on both the New York Stock Exchange (NYSE: DEO) and the London Stock Exchange (LSE: DGE) and our products are sold in more than 180 countries around the world. For more information about Diageo, our people, our brands, and performance, visit us at www.diageo.com. Visit Diageo''s global responsible drinking resource, www.DRINKiQ.com, for information, initiatives, and ways to share best practice. Follow us on Twitter and Instagram for news and information about Diageo North America: @Diageo_NA.